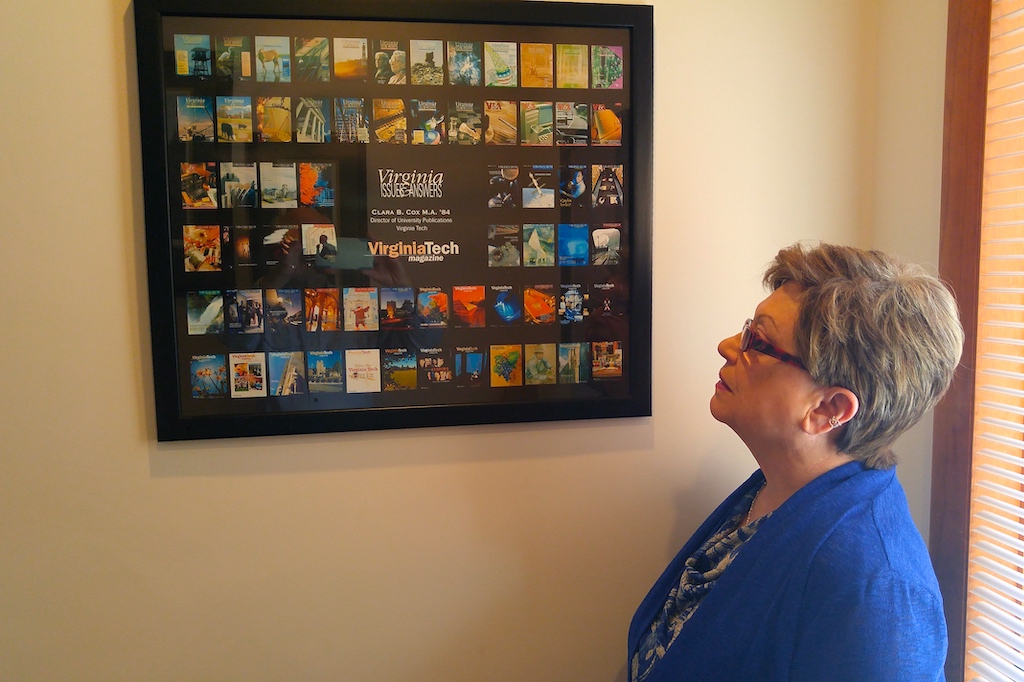 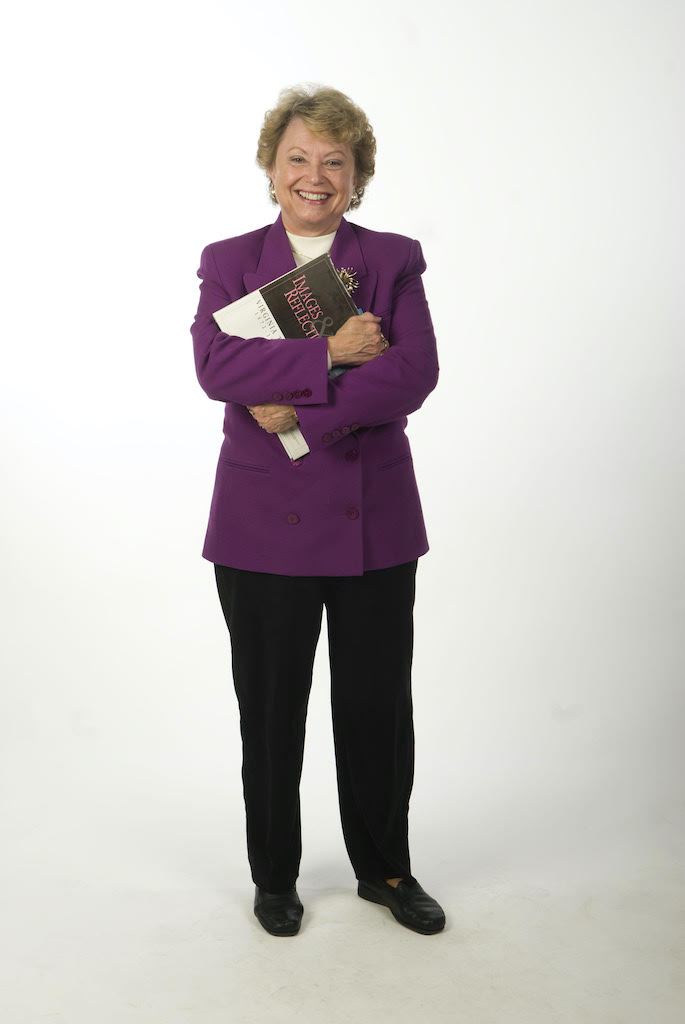 As the former Director of University Publications, Clara Cox has contributed to helping Virginia Tech document parts of its history. An alumna of the university herself, she surrounds her entire life with all things related to the Hokie Nation, a community that she is proud to be a part of even in her retirement. Clara has spent much of her time writing about the histories of other people, events, and experiences; now we want to hear her own story.

Clara was born in Newport News, where her father worked in a shipyard during World War II. When she was two-years-old, her parents moved the family back to Mount Airy, North Carolina, where they resided before Newport News. Soon after this, when she was four, they moved once again to Pulaski, Virginia, where Cox spent the rest of her childhood. Cox would walk four to five blocks to and from her elementary and middle schools every day.

While neither of her parents went to college, it was her father who had always inspired her to think about going to Virginia Tech. He took her to a basketball game and her perception of the University remained glowing ever since, "I just grew up thinking Tech must be heaven," she says.

Later down the road, she realized it actually was a piece of heaven.  When she worked at Tech, she says she would sit in her office and marvel at the Hokie Stone, "I think Hokie Stone is beautiful.  It's just not gray and black and shades in-between.  You can really see color in it.  Like late in the day it just would really pop. It is beautiful."

However, because Virginia Tech did not have an English program by the time she graduated from high school, she began her undergraduate studies at Carson Newman College in Tennessee. Her boyfriend, who would later end up being her husband, went to Virginia Tech. Because it was difficult for them to be away from one another due to the distance, Cox transferred to Radford University for her senior year to be closer to him and graduated with her degree there.

Later, Cox began working at the Virginia Water Resources Research Center at Virginia Tech as a clerk typist. When the director found out she could write, he started her on written projects. Simultaneously, she began working on her MA in English at Virginia Tech, as she noticed a previous employee had been paid more than her for having a Master’s degree. She recalled having several notable professors, particularly Michael Squires, who allowed her to audit one of his classes after she graduated in 1984.

Clara soon moved into University Relations as a public relations professional for the College of Architecture and Urban Studies.  She wrote newsletters for them, while she finished up her degree. After this, she left architecture while remaining in University Relations, and became the manager of Public Service Communications. In 1994, while in this position, she started a magazine called Virginia Issues & Answers a public policy magazine, in which she served as first editor. 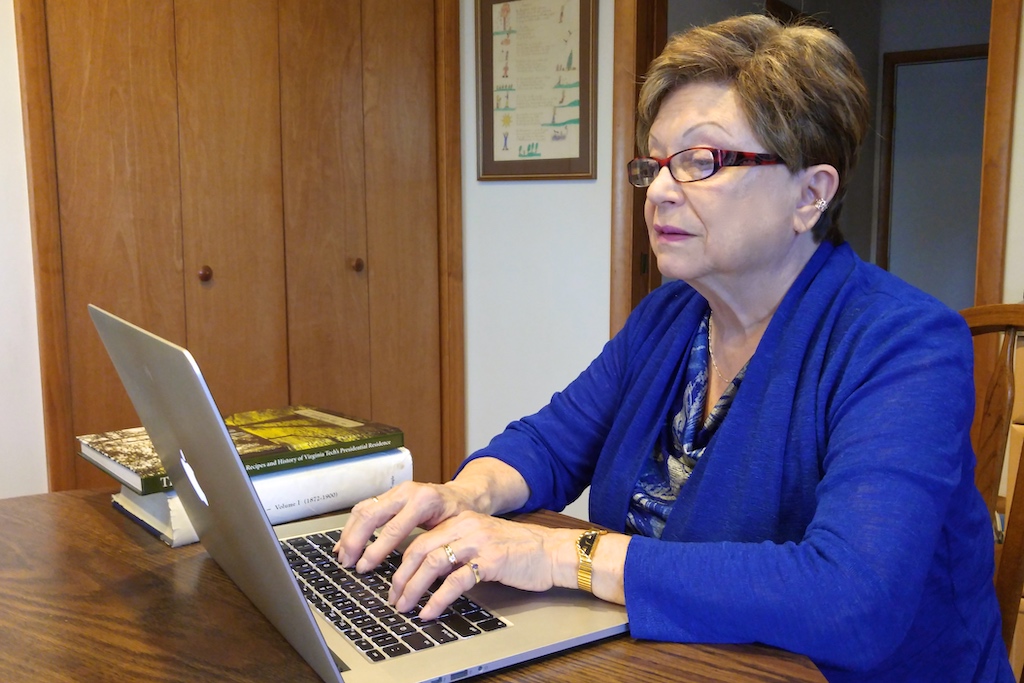 “I was the first woman director in University Relations, and it was hard to get to that point. I really had to work hard.”Clara Cox

Additional historical works she has authored and/or edited include a coffee-table book for the 125th anniversary of Virginia Tech about the history of its presidents, titled “Images & Reflections,” as well as “Generations of Women Leaders at Virginia Tech,” a history of women at the university that also honors female graduates. Additionally, she edited and co-wrote a historical book for Blacksburg’s bicentennial celebration called “A Special Place for 200 Years.”  Her climb to become a director in University Relations was not an easy one, and it took quite a while to happen.  She remembers the work she had to put in, "I was the first woman director in University Relations, and it was hard to get to that point.  I really had to work hard."  One of her most memorable experiences was discovering more information about Addison Caldwell, Virginia Tech’s first student after she became friends with Caldwell’s nephew and namesake, who put her in touch with other relatives of the first student

When someone simply mentions Virginia Tech, Cox immediately thinks of her family. It was here that she got her Master’s, her husband received three degrees, her older brother got his undergraduate degree, and her daughter and son-in-law got their Master’s. She is grateful for the lifelong friends that she’s made from her time at the University, and is proud of the 35 years she spent with it.

Clara Cox is proud of the University’s acceptance of women in higher positions, though she would still like to see a woman become President someday. She remains concerned about how the state doesn’t pay enough for in-state students to come to Tech, and she doesn’t think Virginia Tech gets the credit it deserves on a national scale. She is currently a member of the board for The Smithfield Review along with being a part of the Council on Virginia Tech History where part of the focus is to bring to light the untold stories of women and minorities and the role of indigenous people in the establishment of the land-grant institution. The work she does continues to inspire her, even after retirement, and she simply cannot imagine her life without the impact that Virginia Tech has had on it.

Further reading by or about Clara Cox:

"Hokie, Hokie, Hokie Hy! and a few Other Virginia Tech Symbols and Traditions"