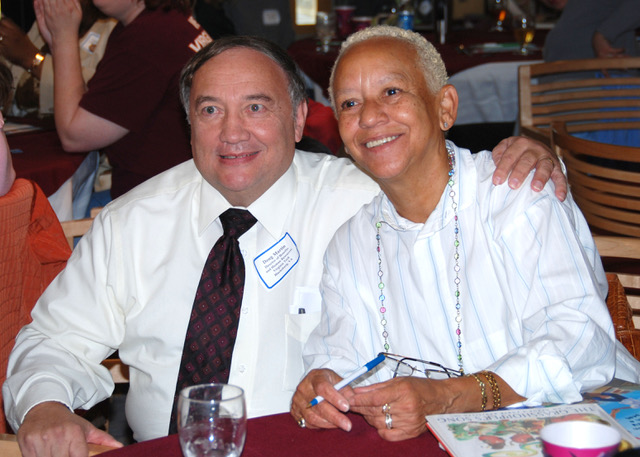 Douglas Martin has spent the better part of a century in service of his fellow Americans. As a 2010 Virginia Tech Daily press release puts it, he has “provided guidance and support to thousands”. That’s no small feat, but it’s all in a lifetime’s work for the director emeritus. Every employee, retiree, student, faculty member and administrator to come through Blacksburg since 1969 can agree that the love Doug Martin has for Virginia Tech knows no bounds.

Doug’s mother, a super-mom, switchboard operator and eventual department store clerk was born on top of a mountain in the tight-knit community of Newport, Giles County. As one of twelve children herself, Doug’s mother was instilled with the kind of authenticity you can only find in a small town. The same can be said for Doug’s father, a Celanese plant worker who was born and raised in neighboring Clover Hollow. After meeting at church, Doug’s parents got married and Doug was born at the Pearisburg hospital on the night of October 2nd, 1941. His brother Darrell came along shortly after that. Growing up in Giles County, the Martin brothers’ upbringing embodied the old saying that ‘it takes a village to raise a child’. Between cutting firewood and milking their cow, Doug and Darrell spent their summers barefooted, playing little-league baseball in the cow pastures with the neighborhood kids. This tradition went beyond just fun and games, however, as pro scouts would often come watch the older Mountain View leagues with stopwatches in hand. It was the scouts’ belief that Bob Porterfield and Mike Williams were not going to be the only all-star major league baseball players to come out of Newport, Virginia. Being raised in a country setting left Doug very much into nature. As teenagers, everyone would get jobs working at nearby Mountain Lake. Doug and Darrell would also end up working on the farms, trucks and silos, at times even putting up 1,000 bales of hay in a single day. The Martin brothers were able to build a strong work ethic, gain purpose and hone their attention to detail; all for 50 cents an hour.

75% of Doug’s high school graduating class went to college and did well for themselves with their advanced degrees. Doug, however, came very close to never setting foot in Blacksburg. Despite having teachers at Newport High who really cared about education, the guidance counseling system there was practically nonexistent. The Future Farmers of America held conventions at Virginia Tech, and that in and of itself allowed Doug to visit the campus and further his decision-making process. Ultimately, it was playing basketball in the gym and Blacksburg’s similarity to Newport that led him to apply and pursue enrollment in 1960.

After graduating from Virginia Tech in 1964 with his Bachelor’s degree in Public Administration, Doug spent the next 4 years in the Air Force. He completed a tour in Vietnam, but split time while serving to travel through Europe and even spend a couple summers playing baseball. By the time Doug got to the U.S. though, he was in dire search of a job. Luckily, he was hired by his alma mater as the first-ever full-time records manager in October of 1969. In the 70s, Doug completed his Master’s degree in Educational Administration and went on to start his doctoral courses shortly after. Progress on that front was slow until he was amiably fired by upper management. Despite this setback, Doug found a silver lining, as he was able to finish up his remaining dissertation by the early 90s. His brother Darrell also went to school at Virginia Tech for both his Bachelor’s and his Master’s degrees and went on to serve as Governor Jerry Baliles’ strategic planner. After the Baliles’ administration, Darrell came back to Blacksburg to work with folks like Jim Nichols in the College of Agriculture, and Dr. McComas in the President’s office.

“I always say we stand on broad shoulders here, of people who labored long and hard.”Douglas Martin

As a freshman, Doug came in as a Business Administration major simply because it sounded like a good idea, again due to the lack of guidance in his life at the time. On top of having a full course schedule and a daily commute, Doug never cut class and kept up a spotless attendance record at Virginia Tech. His punctuality allowed him to form relationships with some of Virginia Tech’s most esteemed professors. For example, Doug had History with George Green Shackelford, Law with Pete Ellison & Statistics with Martin Schnitzer. His favorite subject would end up being Personnel with Paul B. Barringer, as it was the start of what led him to pursue a career in Human Resources.

Thanks to his father, Doug had the quintessential college experience free of student debt. He used to drive his old Studebaker to the now long-gone Pete’s Drive-In, where he knew the owners, and he’d even get a free hamburger when they made one too many. Doug’s good friend Harry Taylor was caught bootlegging higher-quality ice cream whilst working at Squires Student Center. On occasion, Doug would quit a night of studying at the library to visit The Lyric Theater with his friends. After graduation, Doug was at the top of the Giles County war draft list, and Vietnam was waiting for him. Officer training and the Air Force appealed much more to him than going through basic training and heading straight into the Army. Doug aced the cognitive AFOQT exam but ended up enlisting due to the Air Force being at maximum capacity. In Doug’s words the physical conditioning was tough, and the marksmanship came naturally, but nothing was as bothersome as the incessant verbal abuse. Once he made it through training, Doug was called in and told that, despite being fully qualified, he was a quarter of an inch too short to become an officer. He shrugged it off and stayed enlisted. In the process, Doug made rank every step of the way and even earned the Air Force Commendation medal for meritorious service. He ended his excellent military career after playing travel baseball in Holland, Belgium, Italy & Germany.

Doug credits his family with steering clear of judgment and bias and teaching him how to embrace diversity. He found that while working at Virginia Tech, nothing is possible without the help of special men and women from every nationality and walk of life. His area in the military was primarily Caucasian, but his roommates came in all races. Doug believes all of the excellent, long-lasting relationships he’s made professionally came from treating people as if they count.

Upon his return to the United States, Doug was shocked to see how Vietnam war veterans were held in low esteem. Interviewing for potential employment was tough, and so his only goals were to buy a new car, find a wife and play golf. Doug was able to wrangle down a steady records management job after meeting up with Dwight Kregloe, an old friend and classmate of his who was, at the time, working in Human Resources at Virginia Tech. A metallic Bronze Plymouth Sport Satellite and set of golf clubs later, all that was left of his goals was finding someone to spend the rest of his life with. On an ordinary day, Doug was in Burruss Hall when he saw the stunning face of one Donna Kay Knepper. Fast forward through a timeless marriage, two sons and two granddaughters, that chance meeting with the girl in the Treasurer’s office was truly the highlight of Doug’s life.

“Virginia Tech is still a beacon…it’s beyond Southwest Virginia…it’s a beacon that you can be proud of to say I’m from there, I know those people…and that I served them well, and they served me well.”Douglas Martin

Doug witnessed Virginia Tech’s evolution from a small college with to a full-fledged university. He worked alongside Dr. Hahn and Stuart Cassel time at a time when the female population of students barely crossed 400. While in records management, Doug bonded with Dr. Lyle Kinnear and researched the first Tech’s history extensively. One of his first tasks was the Equal Opportunity and Affirmative Action suits and finding the related documentation. There was politics at play with issues like Vietnam and the tension following the Williams Hall occupation, but as Doug puts it, “change did happen…[thanks to] those that labored long and hard during those times”. No matter how tough the day would get, Doug felt empowered to know that he was helping people get through disability retirement, death claims & terminations. As time went on and Doug came closer to tenure, he befriended folk like Sports Information Director Wendy Weisend and Director of Religious Affairs Al Payne. Al and Wendy were two intelligent people with embattled backgrounds in combat who held political beliefs on opposite ends of the spectrum. Their lunchtime debates became a regular occurrence for the next two decades, teaching Doug as he silently listened.

Doug’s role over time had grown to encompass entirely different responsibilities. While the Benefits office worked with faculty and staff directly after the shooting, conversely, presenting the service awards with the University Presidents, he would fill the dead time between individuals with corny anecdotes. He continued to serve by implementing the first wellness program at Virginia Tech with help from Dr. Bridgett Mitchell and the rest of the administration at the time. Officially retired as of January 1st, 2010, Doug finished his illustrious 40-year campaign at Virginia Tech as Director of Benefits. He was designated as Administrative Faculty and awarded Emeritus. Doug also received commendations outside of Tech, as he was the first person from the Mid-Atlantic region to be appointed to the TIAA CREF Advisory Board. Through them, he was able to affect real change on teacher’s insurance and annuity as well as college retirement equity while traveling between New York, Denver and Miami. In addition, Doug forged strong ties working alongside his colleagues in the Virginia Retirement System and the State Department of Personnel Training. 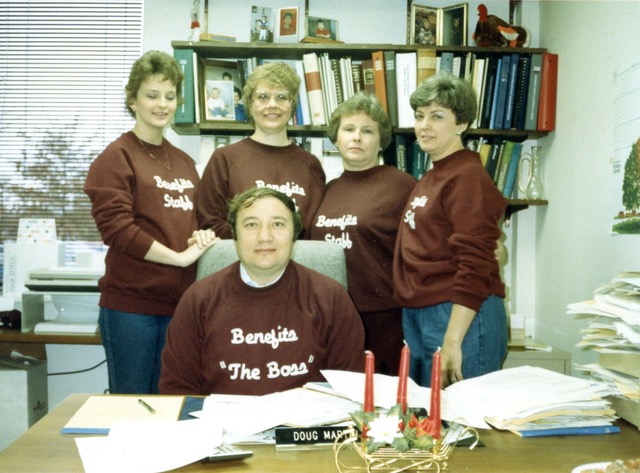 Amidst an ever-growing list of alumni at Virginia Tech, Douglas Martin stands out as one of the most influential people behind the scenes. Every day, Virginia Tech students weave in and around buildings such as Litton-Reaves & Hahn. The truth is that Doug knew George Washington Litton like he knew Thomas Marshall Hahn, William M. Sterrett Sr., Clarice Slusher Pritchard & William E. Skelton. He knew every cornerstone of the legacy behind our campus history; partially because, at one point, he was the one tasked with recording it.