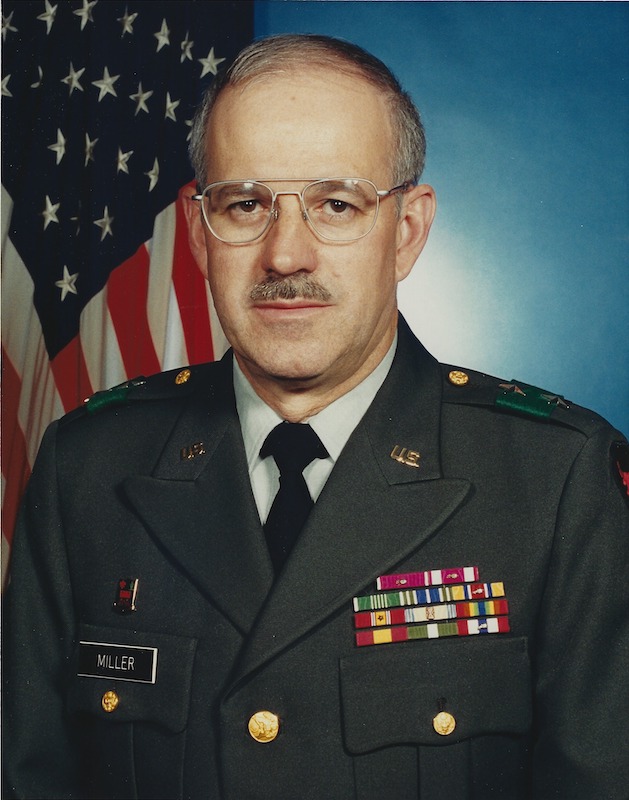 Dr. Gerald Miller has had an accomplished academic and military career, culminating in a PhD degree from Iowa State University and a Distinguished Service Medal from the United States Army. He attributes much of his success to his home university of Virginia Tech, and even with the impressive trajectory of his post-graduate years, his love for the school remains strong to this day.

Miller was born April 17, 1943 in Harrisonburg, Virginia. He lived on a farm in Rockingham County with his parents and four siblings, where he assisted with chores, especially after his father began working for the U.S. Department of Agriculture. “I learned how to work,” he says. “You had a responsibility, and you were expected to perform, and it wasn’t something you questioned.” Miller also remembers experiencing difficulties on the farm due to World War II— the family did not have plumbing, for example, until a few years after Miller was born.

This did not keep Miller’s parents from wanting the best for their children. “We got lectured every morning at breakfast about the need for an education,” he says. In fact, it was Miller’s mother who encouraged him to leave their hometown and attend a school like Tech.

Four out of five of the Miller children ended up going to college. Out of 99 students in his high school graduating class, Miller was the only one to attend Virginia Tech. Miller credits this decision not only to his mother, but to his high school agriculture teacher, who first fostered Miller’s interest in soils on a field trip to Massanutten Mountain.

When Miller first arrived at Tech for his freshman year, he hoped to join the Army side of the Corps of Cadets. He ended up assigned to Army Company E in Rasche Hall. One of his earliest memories of his freshman year, he says, was witnessing the “drumming out” a cadet who had violated an Honor Code sanction.

Fortunately, Miller never saw another cadet be drummed out of the Corps, but he drummed up a few scares of his own. On a trip back to Tech from the New River, Miller was in his friend’s Volkswagen Beetle when the car rolled. He was thrown from the car and landed on a barbed-wire fence. He still has scars, he says, and he had a broken front tooth. “But the doctors or the nurses… said, ‘Did you play football?’” Miller remembers. “I said, ‘Yeah,’ and they said, ‘Well, you learned how to roll.’”

Fortunately, other memories are much lighter. Miller saw his first concert at Tech; a Peter, Paul, & Mary concert in Burruss Hall. He also remembers working on a homecoming float with his company and being part of the last class to ride the now-defunct Huckleberry train to Roanoke.

Aside from his involvement in the Corps, Miller also made time for organizations like German Club (a fraternal organization), Block & Bridle (an animal agriculture club), Alpha Zeta (an agriculture fraternity), and the Agronomy Club. Each of the organizations played a different role in Miller’s time at Tech— he had leadership positions in the Agronomy Club, for example, and he was even recognized by the American Society of Agronomy as an outstanding student one year. From German Club, he learned “teamwork, fellowship, and social graces… obviously, growing up on a farm, I was pretty isolated from the world, so to speak.” Miller’s girlfriend, whom he married between his junior and senior year, frequently visited to attend German Club formals with him.

Agronomy, or the study of soils, crops, and climate, was Miller’s focus while at Tech.One professor in particular, Dr. Sam Obenshain, heavily influenced Miller’s decision to pursue graduate school. “Dr. Sam” taught soil morphology, and Miller received an A in the course— at the time, the second student ever to have done so. Miller knew he wanted to return to school soon after graduating, but his first priority was joining the Army to pay his student debts. After training in Fort Bliss, Texas, Miller was assigned to Fort Leonard Wood in Missouri. He remained on active duty for 32 months, and he left as a captain. 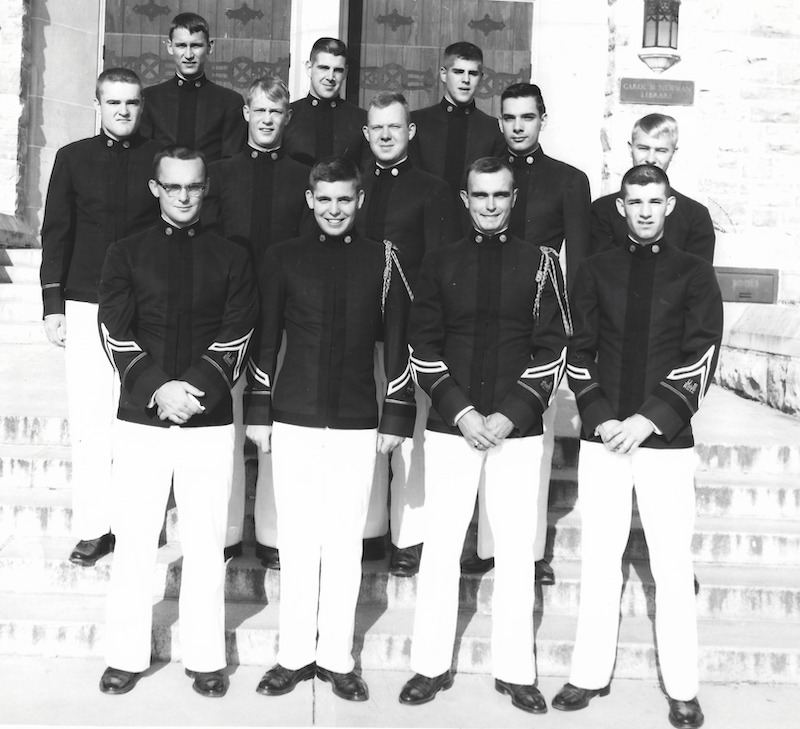 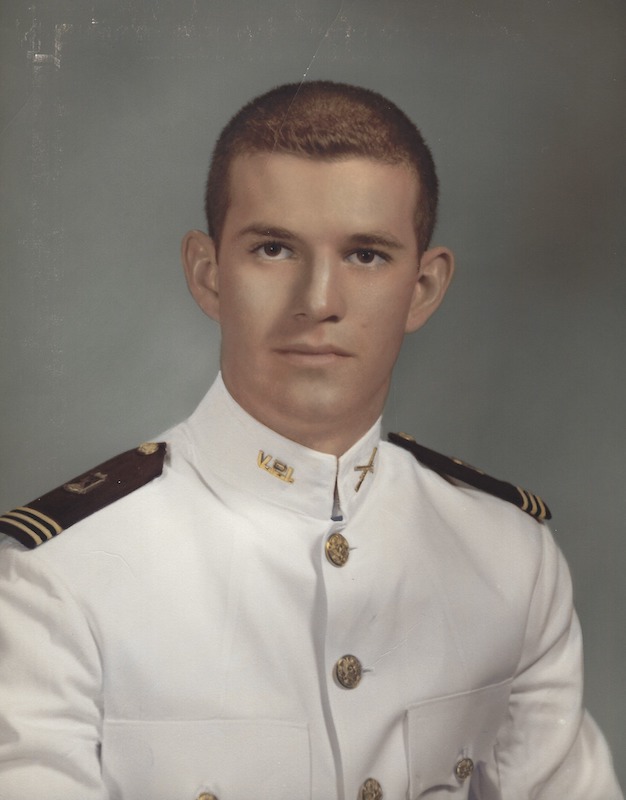 "When somebody just says, “Oh, you graduated from Virginia Tech?”... I guess my reaction is, I am really proud that I’m a Virginia Tech grad".Gerald Miller

Once those 32 months were up, Miller knew that he would rather further his education than be deployed to Vietnam, so he wrote to his former professor for advice. Dr. Sam encouraged Miller to look at schools in the Midwest. After working briefly with the U.S. Department of Agriculture in Iowa, Miller was accepted to Iowa State University, where he found out that Obenshain had also completed his Master’s degree in the late 1930s. “He knew that I would pick up the challenge,” says Miller.

He also joined the Army National Guard in 1969, and he remained part of it while studying at Iowa State. He began working at their headquarters, then eventually moved up to being part of their battalion staff. In 1971, he graduated with his Master’s degree, and three years later, he had a PhD.

Because his academic appointment at Iowa State was in research and extension, he was able to keep a flexible enough schedule to continue his military career at the same time. In 1977, he became a personnel officer for an infantry brigade, and the rest of his military career would be spent in infantry, eventually leading him to as Commanding General, 34th Infantry Division. In 1993, Miller became a major general, one of the highest positions within the U.S. Army. In 1998, he retired, and for his work he was rewarded with a Distinguished Service Medal. Miller nearly did not retire from the Army— he came close to interviewing for a position as Army National Guard liaison with the Joint Chief of Staff. Instead, he took an appointment as the Associate Dean of the College of Agriculture and Life Sciences at Iowa State, a position he still holds honorarily. 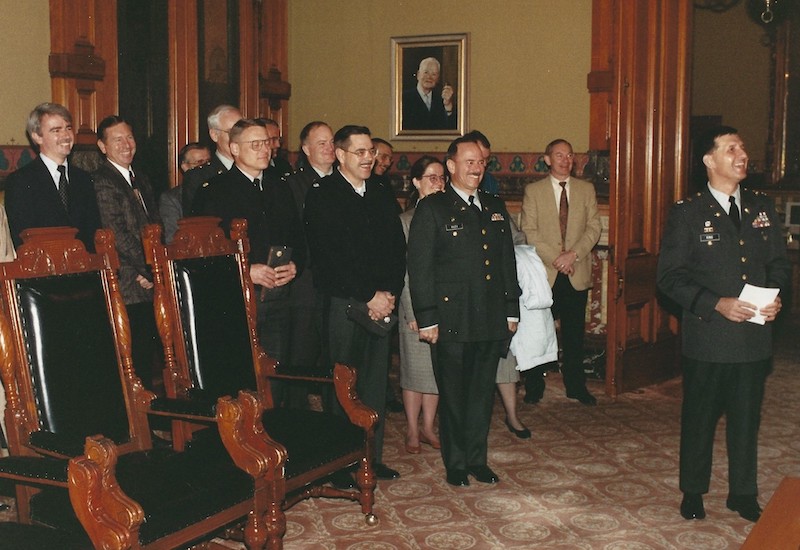 Even after such a long and illustrious career, Miller holds a special place in his heart for Virginia Tech. “Coming to Virginia Tech, it was a life changer,” he says. “It put me on a whole different trajectory than I would have had.” Miller still keeps in touch with his Company E classmates, who send out an annual Christmas newsletter and host reunions every five years. Now that his children are grown, Miller also contributes to a Company E scholarship each year. “I… and a couple of others really pushed to say, ‘Hey, guys… we’re not going to be here forever. We’re brothers, and we have our brotherhood, and let’s make the most of it while we can.’”

“You say, not only did I go there, but think about all these other people that are changing of the world… because of Virginia Tech, because of Iowa State or because of wherever they went to school, they are changing the world.”Gerald Miller

Miller is especially proud to be “associated with a top land-grant university,” he says. “Wherever you go for higher education… and you see what the graduates are doing, you’re just proud of it.” What concerns him, though, is that the school is only able to take a fraction of its applicants every year. “There [are] obviously a lot of top students that didn’t get a letter of acceptance to come to Tech,” he says.

Because Virginia Tech meant so much to him, Miller knows the power that a college education can hold in a student’s life. “My whole career has been about service,” he says. “That was branded right here when I came to Tech: ‘Ut Prosim.’” Today, working with his local soil and water conservation district and participating in local board meetings, he still makes service a part of his daily life. “That’s all about service,” he says. “One word: service.”