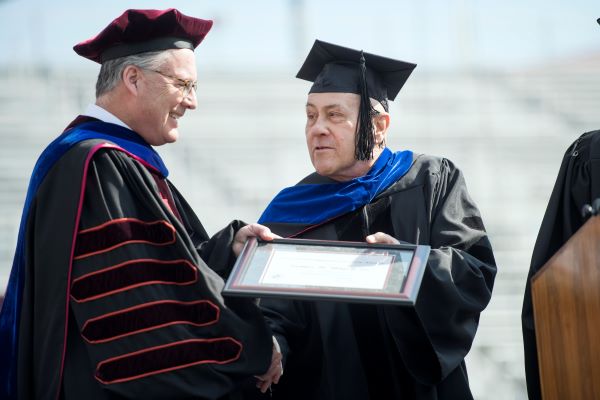 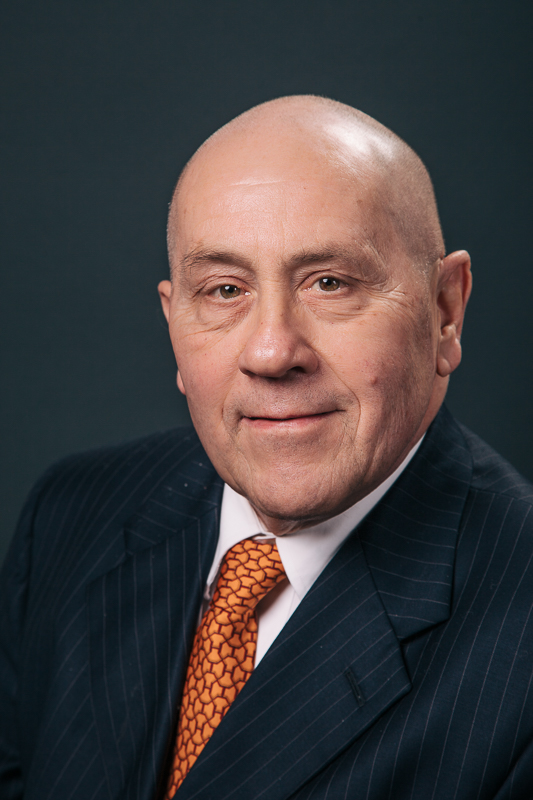 Jim Hatch never expected to end up at Virginia Tech. As he says himself, apart from attending a few Hokie football games during his time as a member of his high school marching band, Tech just “wasn’t on [his] radar.” As a young man, it’s hard to imagine that he would’ve foreseen the major impact Virginia Tech would eventually have on his life.

While he was born in Pulaski, VA, Hatch spent the majority of his childhood in Lynchburg. He remembers the city as having a comfortable, caring community: a wholesome, positive environment to grow up in.

Hatch’s family was small but close-knit. Both his parents were blue-collar workers, with neither holding a college diploma, but Hatch knew that he wanted to seek higher education. When he was a junior in high school, Hatch decided that he wanted to attend William & Mary. With his parents’ support, there was only one thing that stood between Hatch and admission: his grades.

Funnily enough, Hatch only describes his grades during high school as “so-so.” Looking back, he admits that it took him a long time to realize the value of education. However, Hatch still found his way into William & Mary, and by the end of his first year, his grades had slipped below those of his classmates. By the end of his second year, he’d been, as Hatch puts it, “politely asked to depart the premises.”

At this point, the Vietnam War was in full swing, and Hatch had received his lottery number for the draft. Since Hatch was no longer in school, his likelihood of being drafted skyrocketed, but he joined the National Guard and avoided being sent to the war front.

This experience signaled the beginning of a new perspective for Hatch. Once he completed his active duty training for the National Guard, he was determined to complete his college education, so he marched into the office of the Dean of Education at Lynchburg College and pleaded his case.

“[The Dean of Education] looked at me with this quizzical look on his face like really? You think we are going to take you in because you can’t get in anywhere else? But they did, they accepted me, and I am so thankful for that.”Jim Hatch

It was at Lynchburg College that Hatch first discovered his passion for business. He quickly declared a major in Business Administration, and threw himself into his studies. Almost immediately, his grades drastically improved. He interned at a local public accounting firm the summer before his junior year, and continued working summers and part-time even as he pursued his degree.

After Hatch graduated from Lynchburg College, he applied for – and was accepted to – the Master of Accountancy program at Virginia Tech.

When asked about his first impressions of Tech as a new student, Hatch remembers a general feeling of intimidation. For him, Tech was “a very large, almost forbidding [sic] place.” The massive, stone-sided buildings seemed cold and impersonal.

This immediate impression, however, would only linger for so long. While Hatch recalls being isolated from the mainstream of campus, simply through the reality of being a graduate student on a campus mostly populated by undergraduates, he doesn’t recall being alone. He and a group of other graduate students quickly formed their own community, and Hatch describes the professors as being a pivotal aspect of his time at Tech. He still remembers some of their names: Paul Fertig, Larry Killough, Robert Brown. They were more than just faculty: they were a part of the community.

“The faculty were supportive and really almost like part of the family back then and I really relish that experience because there were some faculty members that I really felt like they were partners in my education, not just faculty.”Jim Hatch Of course, Hatch didn’t leave the Vietnam War at Lynchburg College. The conflict was ongoing during his time at Virginia Tech, and he witnessed many of the protests that played out across the campus during those years. In fact, he was tutoring some of Tech’s football players in Williams Hall when a group of students stormed inside and announced their plans to occupy the building.

Hatch says that the occupation of Williams Hall was surprising because it was the first real sign of any purposeful activism on campus. Hatch himself left the building as soon as the protesters announced their plans, but he remembers that the building was surrounded by police the next morning. Hatch describes the ending of the crisis as rather anticlimactic, in the scheme of things. Police used bolt cutters to open the doors, rounded up the students, and arrested them.

Despite this one explosion of activity, Hatch struggles to recall a difficult moment at Tech. He has fond memories of the Drillfield, calling it “ever-present” in student’s lives, and ruefully recalls the frigid walks across the student parking lots in the dead of Blacksburg winters.

When he graduated from Virginia Tech with his master’s degree in accounting in 1972, Hatch tested for his CPA certificate and got a job with an accounting firm, Arthur Andersen, in Charlotte, NC. He spent most of his time running audits of financial firms and banks within the city. After five years with Arthur Andersen, Hatch decided to move from public accounting into the banking business. He interviewed with a few banks in the area and took a job with First Union Corporation, which would eventually become Wachovia and then, finally, Wells Fargo.

Hatch first started working for First Union in 1976, before the era of interstate banking. When the Supreme Court ruled that banks could merge across state lines in 1985, he describes the change as a “rocket ride.” The growth was rapid, ceaseless, and brutal. To pull the explosion into perspective: in 1976, First Union was the 49th largest bank in the country. In 2004, the year Hatch retired, Wells Fargo, it was the 4th largest. Hatch worked 65-hour weeks for 30 straight years. However, he doesn’t regret the experience. In fact, he describes his working years as “priceless.” 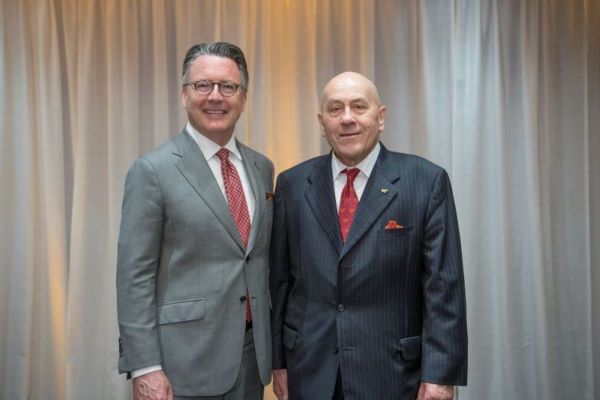 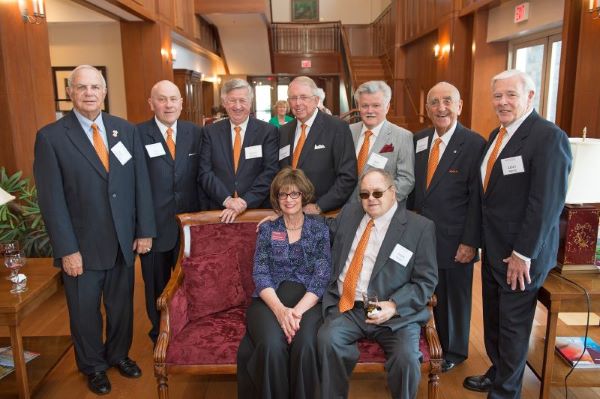 Hatch was invited to join the Pamplin Advisory Council at Virginia Tech around 1980, and he accepted. After serving for ten years, he resigned, wishing the council gave him more opportunities for engagement in the school itself. His wish was, eventually, granted. In the early 2000s, just after Hatch had retired from his position as corporate controller and principal accounting officer at Wachovia (now Wells Fargo) and moved back to Virginia, he received a call from a development officer at Tech. He told Hatch that the Dean wanted him to chair the campaign steering committee for the Pamplin College of Business.

Hatch accepted the position, and revealed his plans to give a significant portion of his estate to Virginia Tech. From then on, he became heavily engaged in giving back to the university and, specifically, to the Pamplin College of Business. He rejoined the Pamplin Advisory Council, on which he has served as president and is now the cabinet chair.

In 2010, Hatch received Pamplin’s Distinguished Alumni Award, which honors alumni for outstanding career accomplishments and contributions to the college. He is a member of Virginia Tech’s 1872 Society, the Pylon Society, and the Ut Prosim Society President’s Circle, all of which acknowledges alumni who have given extraordinary philanthropic support to Virginia Tech. Hatch has also established an MBA Fellowship Fund and three-college wide funds. In 2018, Hatch was a co-recipient of the Alumni Distinguished Service Award presented during the university’s commencement ceremony.

When asked to look back on his time at Virginia Tech, Hatch jumps straight to the feeling of community on campus. It’s what brought him back to Tech after graduation, and to Hatch, it’s what makes Tech a truly special place. He says that one of his greatest joys in life is being a part of the Hokie community and, thanks to his contributions as an alumni, he’s helping that experience be one that thousands of more students can value.