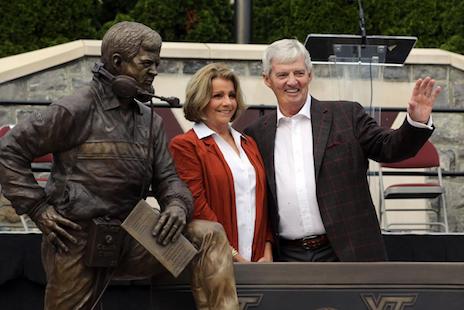 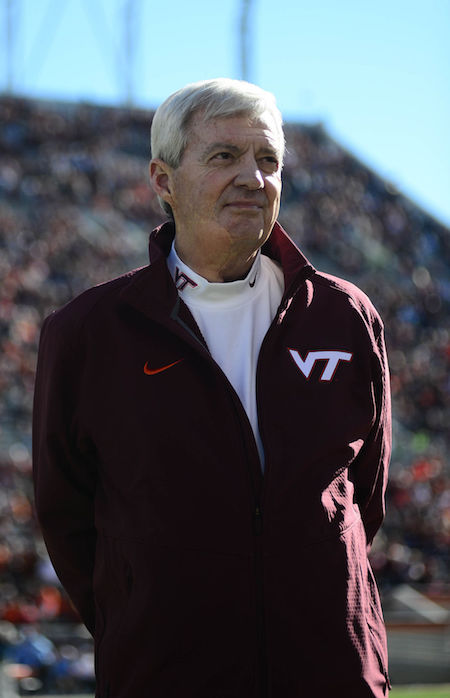 For Frank Beamer, who grew up around Virginia Tech graduates and remembers coming to Hokie football games as a kid, being a Hokie is in his blood. Frank was born in Mount Airy, North Carolina in 1946, the baby in a family with four children. Eventually, his family moved to Fancy Gap, Virginia where he helped on the family farm. His mother, Herma Allen Beamer, was a woman who believed in education and was a big enough influence in the lives of Frank and his siblings that they all graduated college. As he says, “Having produced four college graduates --- from a place in the country where not everybody goes to college --- that says all you need to know about my mom.”

Frank credits his uncle, Sharrell Allen, with exposing Frank and his siblings to things outside of Fancy Gap. Sharrell was a Virginia Tech graduate, and Frank states that “the best thing he ever did for me was introduce me to the school’s football program.”

In high school in Hillsville, Frank played quarterback and defensive back in football. He also played basketball and baseball, but says that football was always his favorite. He says that he could always figure the game out mentally.

When the time came to graduate, Frank knew he wanted to play for Virginia Tech, but the school didn’t show any interest in him until the end of recruiting season when they offered him a scholarship. He accepted the offer right away and played for Coach Jerry Claiborne as a defensive back. As a freshman, he was there for the first game ever played in Lane Stadium, though he didn’t get to play that day.

While at Virginia Tech, Frank met his wife, Cheryl and they married in 1972. Frank graduated with a degree in distributive education in 1969 and afterwards he taught math at Radford High School while he worked on his master’s degree at Radford College. Eventually, Coach Claiborne took a coaching job at Maryland and offered Frank a graduate assistant position, which he took. Frank eventually got the defensive backs coach position at Maryland, and after that he became defensive coordinator.

In the spring of 1979, Frank took a defensive coordinator job at Murray State in Kentucky, where he coached Bud Foster, who eventually worked as a graduate assistant and outside linebacker coach at Murray with Frank.

"No matter where my coaching career took me, Blacksburg would always be my home."Frank Beamer 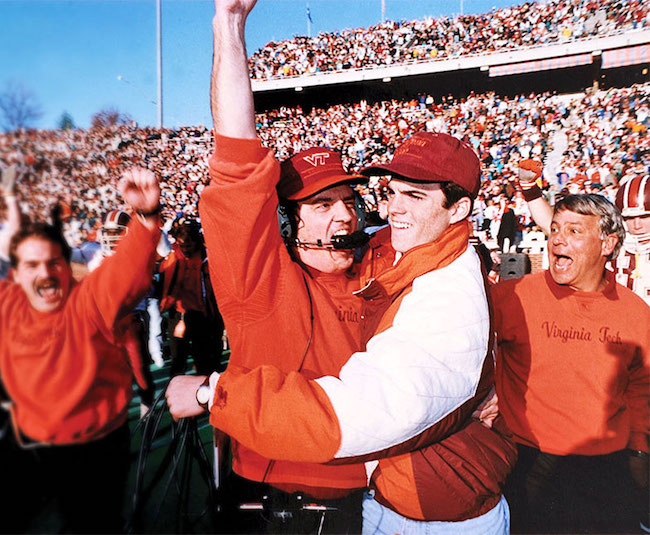 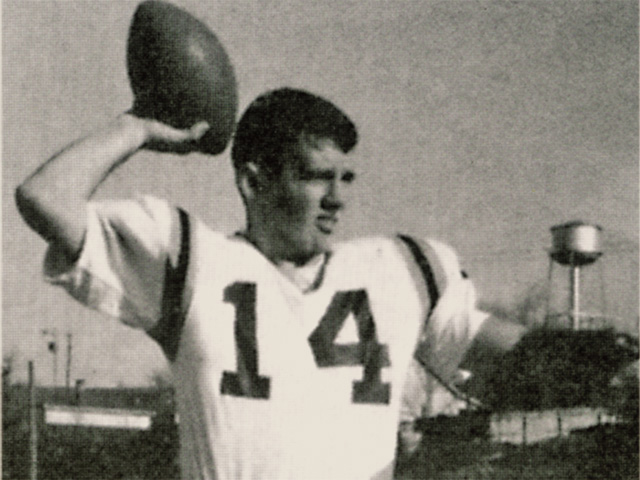 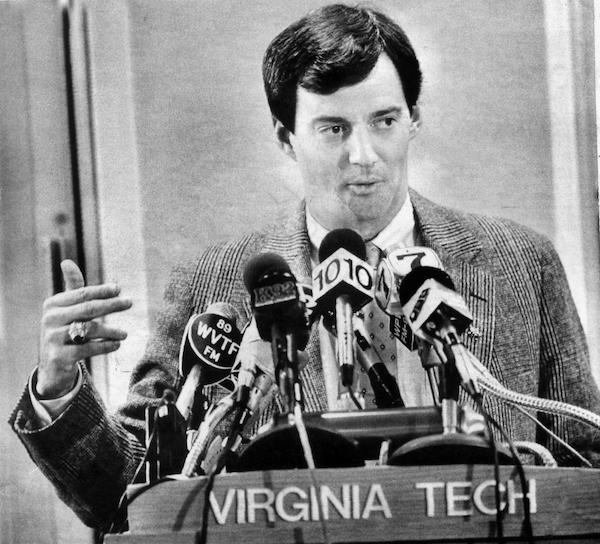 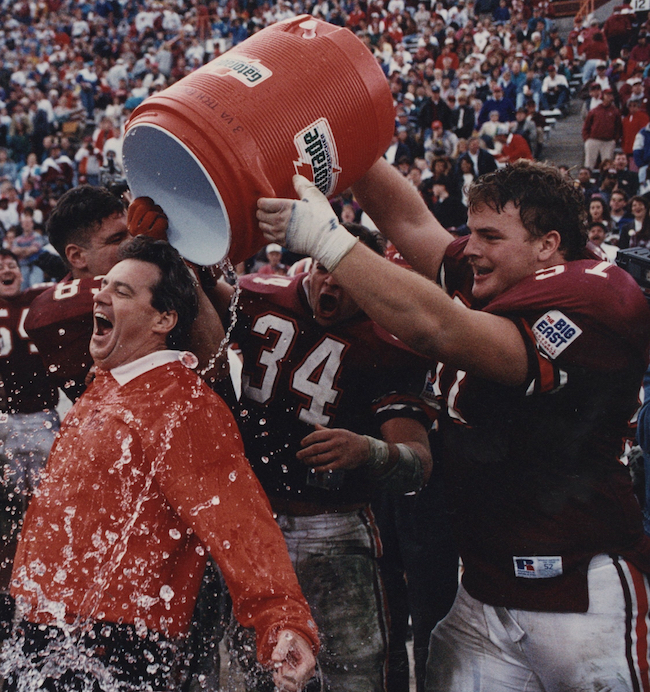 Though Frank coached at other places before Virginia Tech, he says “No matter where my coaching career took me, Blacksburg would always be my home.” In 1986, Virginia Tech hired Dutch Baughman as athletic director, and his first task was to hire a new head football coach. He called Frank and asked him to interview for the position. At the time, the NCAA was investigating the school and the administration had decided to cut athletic expenses and play a tougher schedule, which would be daunting for anyone about to come on as a coach. Nevertheless, Frank met with Dutch and interviewed for the job. As he says: “They probably knew I would have walked from Murray, Kentucky to Blacksburg to get the job, and they were right.”

He officially accepted the job on December 22, 1986. Despite the thrill of the new job, Frank recalls some people being unhappy with Virginia Tech’s decision. When he had his first press conference, Frank told the media that “I really think that someday we can play for national championships here.” At the time, Virginia Tech was an independent team and people didn’t take Frank’s statement seriously; but he knew other independent schools had top tier football teams and believed he could turn the program into a top competitor.

"This is my alma mater. This is where I want to be. And this is where we will be as long as I am coaching."Frank Beamer

After Frank was hired at Virginia Tech, he brought on assistant coaches with him, including Bud Foster, Steve Marshall, Keith Jones, Duke Strager, and Larry Creekmore. In his first season at Virginia Tech, Frank opened with three losses before a win against Navy at Lane Stadium. The NCAA also hit the football team with sanctions, limiting the number of scholarship offers, adding to Frank’s difficulties that first year. Due to the NCAA probation, Frank was given an extra year to his contract for every year they were on probation. Frank and the Hokies ended the season with two wins and nine losses. Despite a hard first season, Frank says “Even if I knew about the NCAA sanctions and the penalties that were coming, I still would have taken the job.”

In addition to stresses from the NCAA, Frank and his family also had some negative experiences from fans who were upset about games. At one point Frank’s 11 year old daughter, Casey, answered the phone at home after a rough game and listened to a man upset with Frank yell at her and call her dad a lousy coach who should be fired. Though he experienced the upsetting and stressful aspects of coaching, Frank had highs as well.

In 1993, after some layoffs and changes to the staff, Frank saw a different type of team. At the end of the season, the team had 9 wins and 3 losses. After the Hokies beat Syracuse, they got an invitation to play in the Independence Bowl, where they beat Indiana, the team’s first bowl win. That bowl win began the bowl streak that continues today. By 1996, Virginia Tech was “a winning program and there was no turning back.” 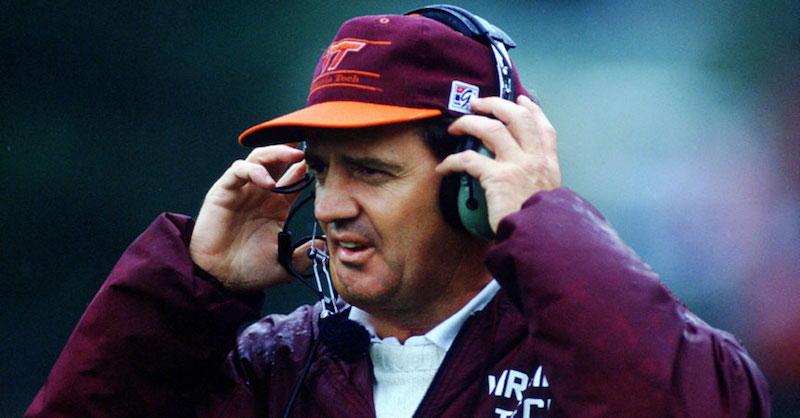 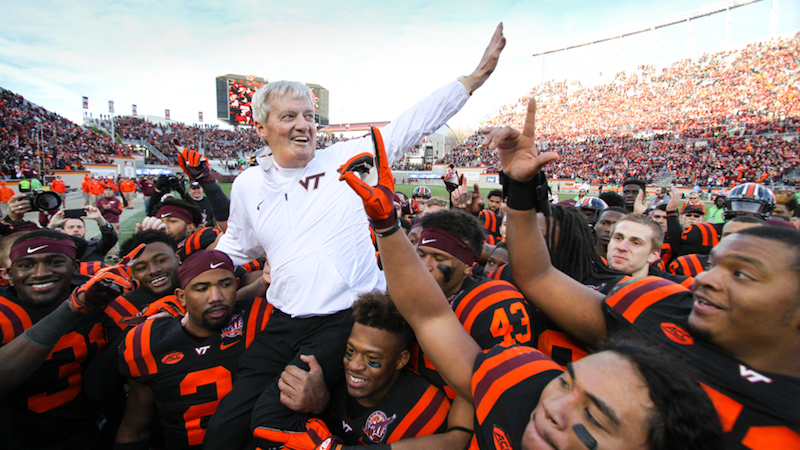 In 1999, the Virginia Tech football team started the season ranked at number 11 and by the end of the season were ranked number 2 with 11 wins and zero losses. The team was heading to the national championship, just like Frank said they might when he had his first press conference as head coach, to play against Florida State. Virginia Tech lost to Florida State that day; and Frank says that he believes the Hokies were good enough to win.

After the 1999 season, Virginia Tech had a following “that expanded way beyond Blacksburg and even beyond Virginia.” With the football team’s success, Frank was offered coaching positions, including the Green Bay Packers and the University of Alabama, but Frank says that only once did he consider leaving Blacksburg. In 2000, he was offered the head coach position at the University of North Carolina, and he went as far as verbally accepting the job. However, when he and Cheryl went to Chapel Hill for a visit, rather than staying overnight before the next day’s press conference, he went back to Blacksburg and changed his mind that night. Frank says that the program at UNC was “built on somebody else’s blood and sweat” and that night he realized his love for Virginia Tech and Blacksburg. He knew that Virginia Tech “was--and always would be--my home." He woke up the next day in Blacksburg and thought to himself “This is my alma mater. This is where I want to be. And this is where I will be as long as I am coaching.” He turned down the offer from UNC that day.

"There are so many elements to a college campus. During the week, people go their own way….But on Saturdays, we’re all one. We all come together in Lane Stadium, rooting for the same thing.”Frank Beamer

In the early 2000’s, Frank had trouble with his team outside of the football field, making the chemistry on the team weak. However, by 2004, Frank says the chemistry changed and the team won the ACC championship and the Sugar Bowl. Frank says he learned that year that “good chemistry trumps good talent every time.”

Frank emphasizes the importance he placed on having good players who were also good people. “If we recruit the right kind of kids, we won’t have as many issues,” and that some of his best players have been the best people.” He also stresses giving young adults the opportunity for a college education who may not have had the chance without sports. He hopes that those students will get a good education and live productive lives afterwards due to their opportunity. Due to Frank’s emphasis on education, in 2008 he and Frank Cowan started “Herma’s Readers,” named after Frank’s mother, to help elementary school children learn to read.

Though he has many accolades and the affection of thousands of Hokies, Frank remains most proud of the role he and his colleagues have played in the lives of the Virginia Tech team. Frank said of his time at Virginia Tech: “We made a difference here. We helped develop hundreds of young boys into men and helped them get a college education so they could better their lives. I think we did it the right way too, teaching them how to treat people and respect everyone along the way.” 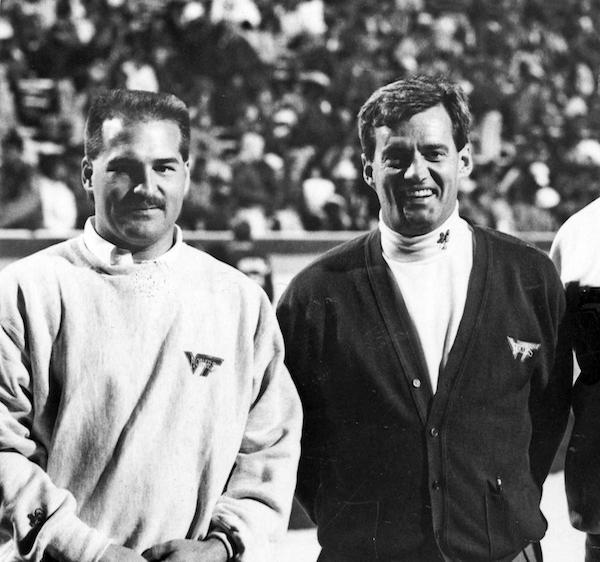 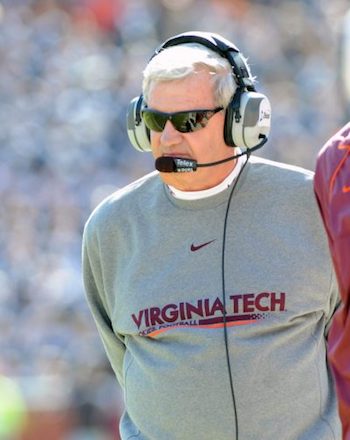 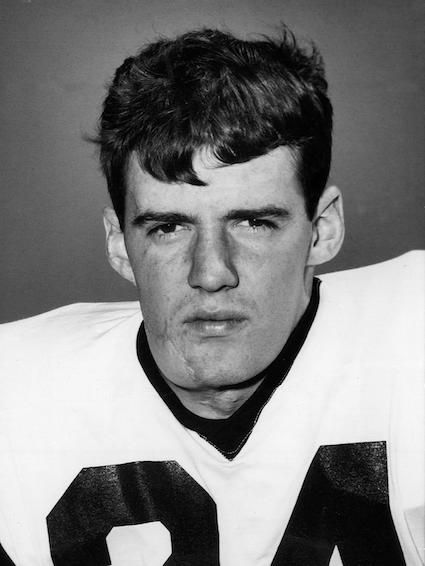 "I take great pride in comparing what Virginia Tech had in 1987 to what we have today."Frank Beamer

Throughout the good and the bad, Frank has stood by and for Virginia Tech. As he says “We built something here. We build something substantial that future Hokies will enjoy and benefit from long after I’m gone.” His role in Virginia Tech athletics has helped the university grow and become home for Hokies in the past and present.

As Frank says of Virginia Tech: “This has been my home since I arrived here as an unsure freshman quarterback in the summer of 1965, and it will remain my home until the day they put me in the ground...I will remain a Hokie ‘til the day I die.” Most Hokies will find themselves saying the same thing thanks to Frank’s and other proud Hokies’ work over the years.