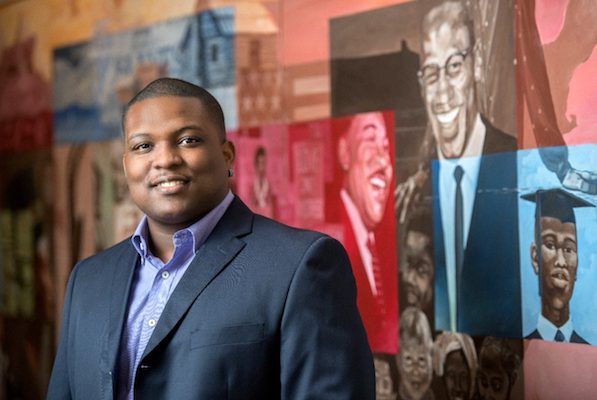 Joe Frazier began his undergraduate career at Virginia Tech in 2009, and remains a part of the Hokie community through his work as assistant director for the Culture and Community Centers in Squires, where he oversees the Asian Cultural Engagement Center. He also advises the Asian American Student Union, the Jewish Student Union, and the Muslim Student Union as part of his work at the university. Outside of Virginia Tech, Joe is an active member of the local NAACP chapter and is the Development Committee Chair for the Christiansburg Institute.

Joe grew up in a variety of locations, both in the United States and internationally due to his father’s military career. Growing up, his parents both went to college and stressed education and good grades throughout his life, leading him go to college. At Virginia Tech, Joe majored in sociology and philosophy as an undergrad, and got two master’s degrees in the same subjects.

Joe admits that he doesn’t have a very interesting story about choosing Virginia Tech for his college career; he just ended up a Hokie. He recounts his experiences as a Hokie with affection while also refusing to sugarcoat the more negative aspects of his time as a student, such as racial stereotyping and prejudice. In times when he faced these prejudices, Joe turned to organizations such as the Black Cultural Center and the Student African American Brotherhood where he was able to discuss these experiences with people who had been in similar situations.

“That was the cool thing...about these groups...like Student African American Brotherhood, like the Black Cultural Center in Squires, is that when these kinds of experiences happen you’re still in community with folks who are all experiencing the same thing, so it’s easier to process.” Joe Frazier

It’s organizations such as the Student African American Brotherhood and other everyday interactions with fellow Hokies that influenced Joe in his academic experience. It’s also similar interactions that provoked him to act on social issues, such as when he was convinced by a PhD student at an NAACP meeting to go to Ferguson, Missouri following the death of Michael Brown. Joe was also inspired by Paulo Freire’s statement that “Washing one’s hand of the conflict between the powerful and the powerless means to side with the powerful, not to be neutral.” Joe believes there is no such thing as neutrality when it comes to justice, and knows when he needs to act on his beliefs.

In addition to protesting against police brutality, Joe formed the Student Police Unity League, a volleyball league with teams of police officers and minority students from Virginia Tech. In forming these teams, Joe hoped to create relationships between police officers and minority students. This league speaks to Joe’s desire to take a hands-on approach when it comes to social issues and activism.

It’s action such as this that often made Joe stand apart. His frustration during graduate school with sociology scholars who have detailed theories on social inequality and social issues but never do anything inspired him to act personally and make an individual effort to address social problems. This action led to him receiving the Aspire Award for Civility in 2016. Joe appreciates being honored in such a way, and wants to highlight that there are many people doing hard work for social justice that don’t get recognized like he did. 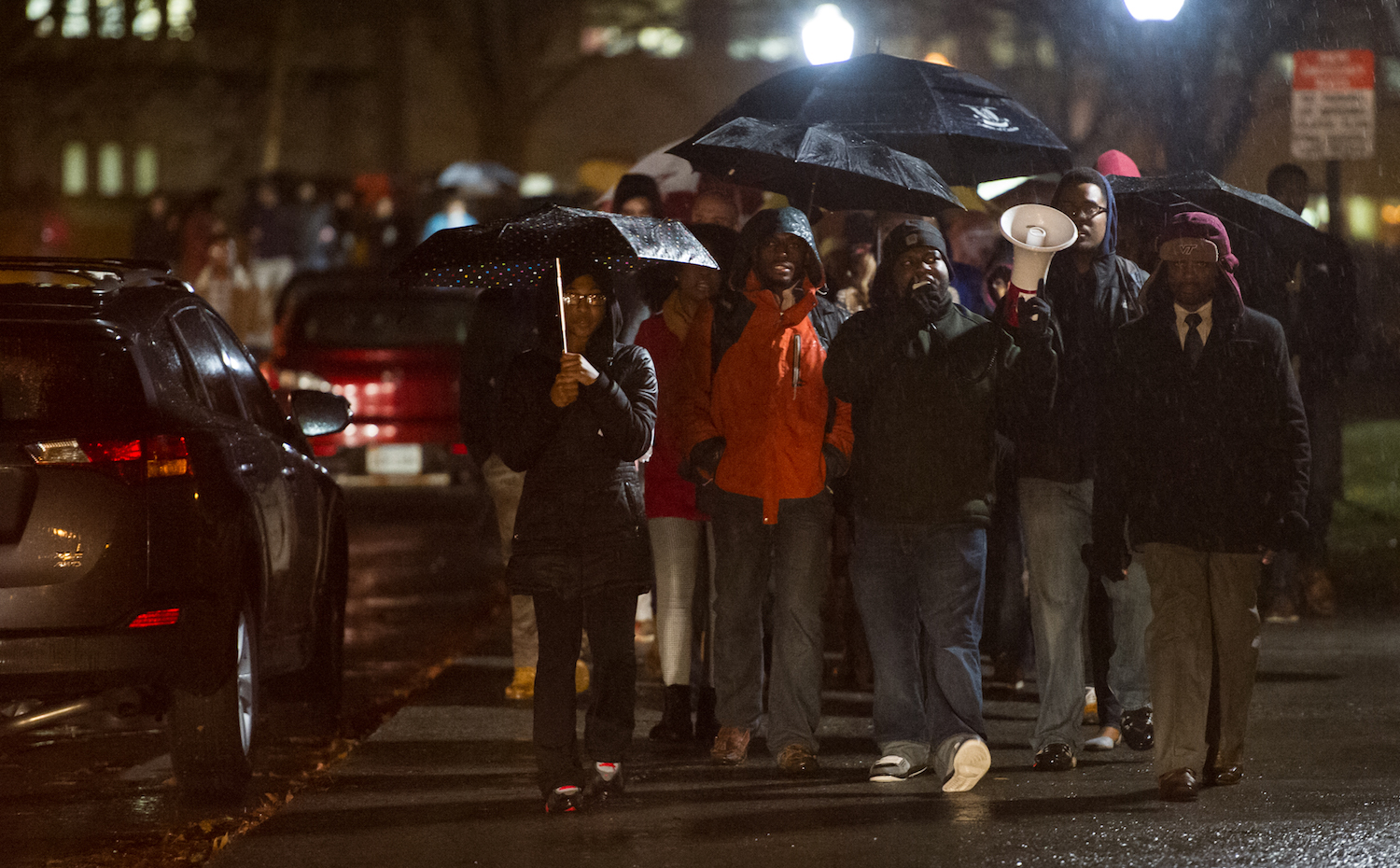 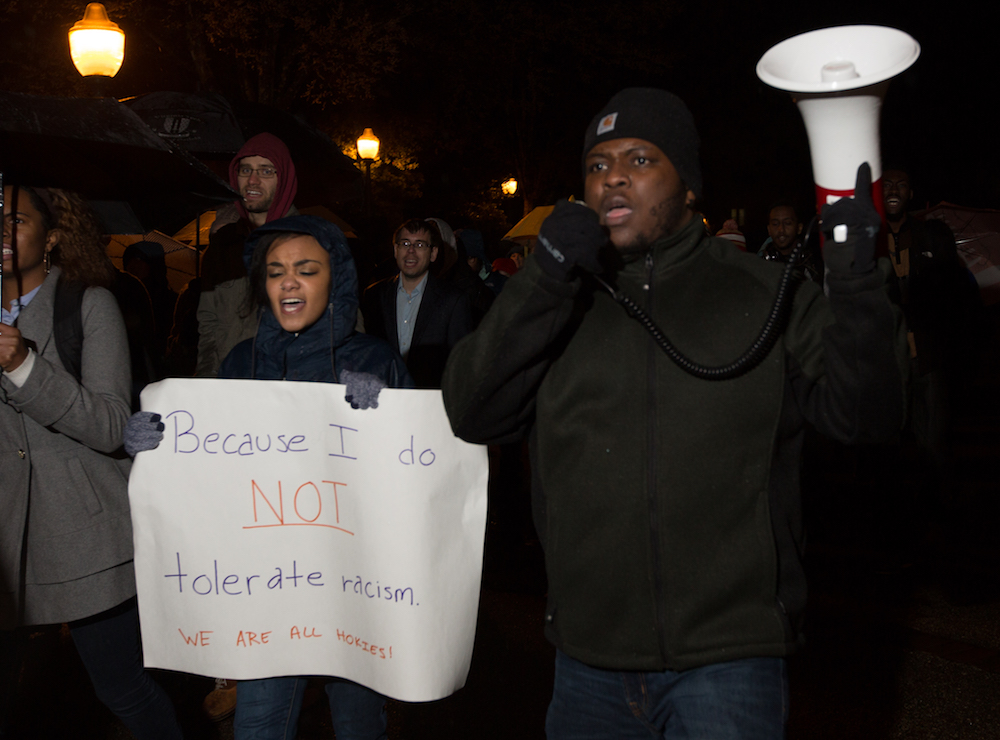 As far as activism and service goes, Joe encourages Virginia Tech students and faculty to be aware of the problems facing their immediate communities as well as the broader world. For Joe, serving fellow Hokies as well as people in surrounding counties who are struggling or facing injustice should common for Virginia Tech students. In this way, he lives out our university motto, Ut Prosim, and desires for Hokies to practice the motto in everyday life as well.

“Philosophically we talk about morality, it just seemed that this is wrong to study these populations, to come up with these theories but not actually do anything with that research to better the problem.”Joe Frazier