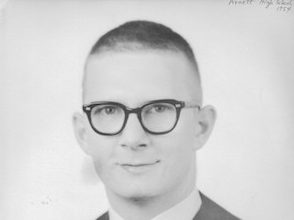 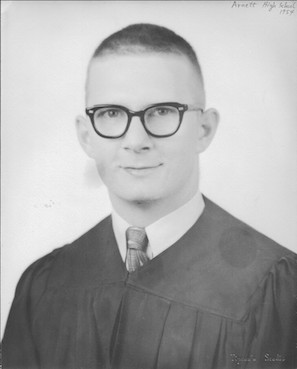 David Roper was first drawn to Virginia Tech because of the mountains and landscape of Southwest Virginia. He accepted a job as a physics professor in 1967 and retired in 1998. During his work as a physicist he discovered a new particle, taught physics in underdeveloped countries and was a tenured professor for over 25 years. With his success and accomplishments, it is hard to believe Roper first decided he wanted to teach physics while attending a small 4H high school that did not offer higher level math or science courses.

“I enjoyed solving problems in high school. I loved algebra and when I milked the cows, I would work algebra problems on the barn wall. I thought, ‘Why waste my time when the cows are being milked?’”David Roper

Roper was born in the small town of Shattuck, Oklahoma, and raised on his father’s dairy and wheat farm. Most of his childhood consisted of him helping his family on the farm. In his youth, one of Roper’s passions was mathematics. Unfortunately, the small town high school Roper attended did not offer higher level math courses like calculus or trigonometry. Roper’s father did not want him to become a farmer, but rather to go to college and get a better education. When he was in high school, Roper decided he wanted to become a physics professor by reading about it at the local library, because course in physics were not offered at his high school.

In college, Roper was behind other students who came from big cities. He spent his first year taking beginner math classes so he could catch up to the other students. Although he might have started behind in math, Roper was smart and caught up fast. He graduated at the top of his class at Oklahoma Baptist and went on to graduate school at the Massachusetts Institution of Technology where he continued to study physics.

“My father was very proud of me. They didn’t always understand what I was doing. My sister – once I went home about halfway through graduate school – I figured out she thought I was in the medical profession in physics.”David Roper

While finishing his thesis at MIT, Roper went to Lawrence Livermore Laboratory in California for his post-doc; there he studied pion-nucleon scattering. He also discovered a new particle called the Roper Resonance and got it published, naming after himself. After his post-doc, he went to teach at a small college in Louisville, Kentucky called Kentucky Southern College. He taught there for two years before coming to Virginia Tech.

“It was in April when I came. A fellow picked me up he lives right around the corner, he picked me up at the airport and drove me down Catawba Valley. You know, Harding Avenue. You ever drive down that way? In April, the dogwoods are in bloom. The red buds were in bloom. It was absolutely beautiful. I said, ‘I want to live in this valley.’ I did eventually – I lived in that valley for 24 years after I came here.”David Roper

As a professor at Virginia Tech, Roper introduced the first courses of biophysics and enjoyed teaching quantum mechanics as well as other physics courses. He came to Virginia Tech when Marshall Hahn was president. During this time, Hahn was focusing on building up the science departments, including physics. Seven professors were hired the year before Roper came and seven more in ‘67 when he first started teaching; this tripled the size of the department. Roper enjoyed being apart of the growth of the physics department and the university. After teaching for about 25 years, Roper became the physics department chair. He held the position from 1990-95. He was an advocate for women physicists and had to handle the stress of the beginning of the departments’ budget cuts.

It has been 50 years since Roper first came to Blacksburg. Although he had minor setbacks as a child, Roper became a highly respected physicist around the world. He continues to teach at the Lifelong Learning Institute here at Virginia Tech. Roper teaches different courses on fossil fuel and environmental awareness. One of the biggest reasons why Roper decided to stay in Blacksburg for the last 20 years after retirement was because of the mountains: one of the sole reasons he came to Virginia Tech in the first place. Although he has been all around the world, Blacksburg has been the best place he has ever lived.